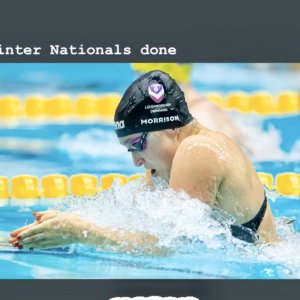 Megan learnt to swim at the age of 5 and impressed her teacher with how quickly she progressed. At 7 years old she joined Loughborough Town Swimming Club and soon showed her potential, breaking the club records for all strokes each year. She won the County Championships in her first year at 9 years old and was noticed by City of Leicester Swimming, who invited to join them when she was 10 years old. She competed in the County Championships every year up to 14 years old and won each year. As her swimming progressed she gravitated towards Breast stroke, IM and Fly swimming. Megan has not forgotten her first club Loughborough and represents them for home galas, Arena and Leicester League meets. She represents a good role model to the young swimmers and helps with coaching whenever she can find the time. In November 2013 as recognition for her involvement with the club, she was thrilled to receive life time membership.

In 2010 Megan was selected for the ASA England Development Program. She progressed through the program to the final level 3 in 2014 which finished with an overseas camp in Portugal. Megan was also selected to represent Leicester and England at the International Children's Games in South Korea 2012 and Canada 2013.At the games she won gold medals at Breastroke,200 IM,4 x 100 medley relay and 4 x 100 freestyle relay. During this time, she was selected for the UK school games in Sheffield and won Gold for 200M Breast stroke. Due to her achievements, she was entered for The Charnwood Junior Sportsperson of The Year which she won. The Leicester Mercury noticed her achievements and she was entered for The Young Sportswoman of The Year in 2014 where she was runner up.

2010 was the first-time Megan qualified for National competition age 12 and 2012 was the first year that Megan achieved qualifying times for the British Championships and was very memorable because she got to swim in the Olympic pool before the Olympics. She has qualified every year since and has broken county records for 50,100 and 200M Breast stroke on numerous occasions-the most recent was at the ASA Winter Short Course Nationals (Dec 2016) where she broke the 100M Breast stroke record twice and the 200M Breast stroke.

At the British swimming Championships in April 2017 Megan achieved getting into the 200m Breaststroke Ladies Open Final, also winning a Silver Medal in the ladies Open final at the Summer Nationals in July. At the Flanders Open Meet in Belguim January 2018 she also won a Bronze medal in the 200m breaststroke.

For the last 4 years Megan, has been swimming with the Loughborough University. This is another step up in training where she trains in the pool 9 times a week, does 3 gym sessions, circuit training and a spinning class. The level of competitions is also a step up with more international meets. Over the coming months, she is swimming at The British Championships in London in April 2020 Olympic Trials, and the Summer British Nationals in July plus other meets throughout 2020.

Megan said ' The Inspire Grant will help towards the cost of international meets or for new racing kneeskins. Each year the cost of swimming increases and I would not be able to pursue my dream without the help from grants such as Inspire Awards.'

Simon Taylor, Inspire lead said; 'We are delighted to support Megan with this award. She is another example of a young person demonstrating the dedication and willpower required to succeed in this most demanding of sports 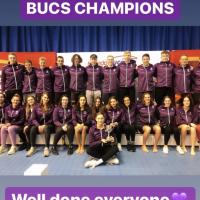 I swam for Loughborough Uni up in Sheffield at the Bucs Long course in 3 races and 1 relay. I made finals in all my events finishing with Silver in the 50m Breaststroke and Bronze in the 200m and 100m... Read More »

First race of the year Long Course was up in Sheffield at the Burns Meet. I travelled up there on Sunday afternoon for the 200m Breaststroke.

At the Burns meet there were just heats no finals so not sure... Read More » 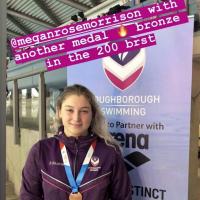 After having just a couple of weeks off racing I was back up Ponds Forge for the Short Course Nationals. 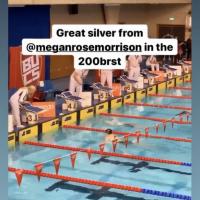 On that evening I swam the 50m Breaststroke in the Mens/Womens 200m Medley Relay Heats Loughborough Team 2.... Read More » 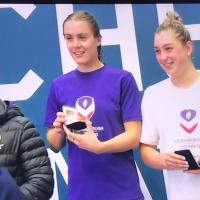 I travelled to Manchester on Friday for three races over the weekend. I was looking forward to racing as this was my first competion of the season.

On Monday July 22nd I travelled up to Tollcross International Pool in Glasgow .

Tuesday was my first event 50m Breaststroke making the final and finishing 2nd with a new PB and a Leicestershire Ladies Long... Read More »

I had not swam in a competition since the British Championships in Glasgow,... Read More »

On Sunday 14th April I travelled again from East Midlands Airport up to Glasgow to compete in the British Championships.

Thursday 14th March I travel from East Midlands Airport to Edinburgh to compete in 3 swimming events.

I swam the 100m breaststroke on the Friday making the B final and coming 2nd. 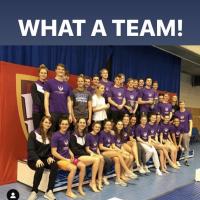 On Friday February 15th I travelled up to Sheffield to compete in the Bucs Long Course Championships. I was only swimming the one event 200m Breaststroke which was on Saturday February 16th.