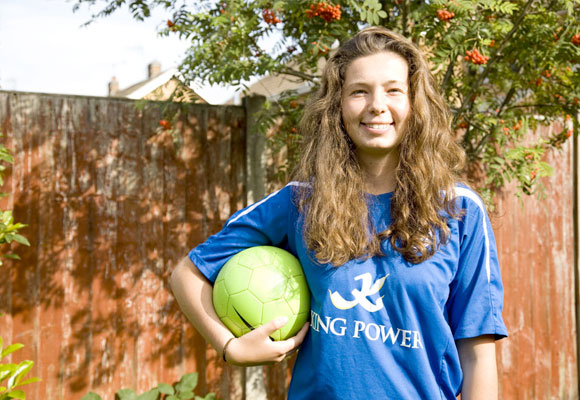 'I was 12 when I felt chest pain whilst walking. As a precautionary measure we went to the doctors and they were doing a scheme that meant that if any child came in with chest pain, they'd do an ECB and check for undiagnosed heart conditions.

It came back abnormal and I had tests at Glenfield Hospital. The results were again abnormal and I was put on beta-blockers with further tests revealing that I had congenital defect. The initial chest pain I'd experienced wasn't actually related, it was muscular, so I had no real symptoms. I was just lucky that the GP surgery were carrying out those tests'.

Jess was told that she could no longer play competitive sport, at a time when she had been identified by the Football Association as of international potential. A keen footballer, she was determined to continue playing sport and living her life to the full, as she explains, 'I'd go crazy if I couldn't play football. I play four times a week for Leicester City Women, the county and the school. The FA let me play despite my condition and the physio's have a list of the medications that I am not allowed to take. 'It doesn't really affect my day to day life. I'm not supposed to do things that get the adrenaline going, like visiting Alton Towers, but I do. You have to live your life and taking medication reduces the chance of anything happening by 95%'.

'The main thing is to raise awareness. If young people had compulsory checks at a certain age there would be far less casualties, and if every young person learnt CPR they would become a potential lifesaver but having defibrillators at schools and sport clubs would also be handy in emergency'.

Jess' story demonstrates what can happen when an underlying heart condition is found just in time. However, no young person in the UK should ever be put in the position of having to rely upon a stroke of 'luck' to spot a congenital heart defect. With the right medical advice and support, Jess, really is living life to the full and playing the sport (football) she loves with a passion. There can be no better role model for JHMT than young Jess who is leading by example and is one of the many inspirational young people involved in the Trust's work to increase the awareness and reduce the incidence of SADS'