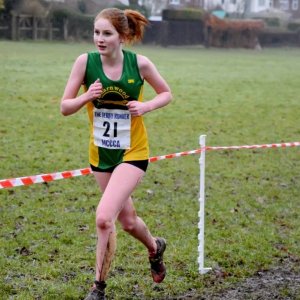 Hannah is 20 years old and another one of Leicestershire's growing number of young athletes' who want to be the best they can be despite whatever obstacles are put in the way. She currently competes in middle distance events, particularly 3k on the track, cross country and road running, competing for both Charnwood athletics club and the University of Birmingham.

Hannah is now in her 2nd year studying law at the University of Birmingham and is regularly training with the University's athletics and cross-country team. After a successful track season she is keen to continue that progression throughout cross-country season with the help of her coaches.

Hannah's passion is running which was evident from the moment she took up her first ever primary school cross country in year 2. At 10 years old, Hanna joined Charnwood Athletic Club where both her parents had been members of previously.

During a short space of time Hanna took part in numerous cross country and track races and regularly was placed in the top three. At the start of the 2014 cross country season, Hannah came under the coaching wing of Roy and made an instant impact by winning the secondary schools cross country league, followed by another series of top finishes resulting a 3rd place in the National English Championships. The top 8 finishers automatically go forward to represent England at international level.

This was another key milestone for Hanna as she represented her country and finished 8th v Ireland and proudly gained her first England vest. In 2015, Hannah was to face another challenge, an athlete's worst nightmare - injury, having suffered shin splints which put her out of action for 9 months.

The good news is Hannah began her comeback in 2016, free from shin splints and during the summer started steeple chase training as a way of getting stronger. This road to a fully recovery aided by lots of hard work and a fierce determination to overcome any setbacks has recently paid dividends having achieved the qualifying time for nationals and contributing to a great team performance in the Midlands Cross Country Relays, gaining the 3rd fastest leg of the day.

Hannah said: ' Getting this grant would allow me to achieve my aim of getting back into the top 10 at nationals as I would be able to purchase new footwear and thermal base layer clothing which would limit the chance of me getting injured which would mean I could have my solid winter training ready for Midlands and Nationals in the new year, as we train outside in the mornings and evening.'

Inspire Project lead Simon Taylor said: ' This award helps a promising young athlete to make the next step in fulfilling her undoubted potential which is at the heart of what the award scheme is about.

I have just completed my first 4 week block of winter training! In the coming months I will begin to race XC for the first time in 2 years, starting with Manchester Relays in 2 weeks time.

What a successful season.

After a long track season I recently completed my final race! In both the 3k and 1500m I achieved huge PB's. This would not have been possible without the support from the JHMT.... Read More »

In the last 2 months I have been busy racing, trying to achieve PB's in my track events. This season I have currently managed to take 3 seconds off my 1500m and 8 seconds of my 3k times. These are the... Read More »

Start of the Track Season

Thank you once again for the grant, it has been extremely helpful assisting with physio treatments to get me prepared for the long track season ahead.

After a long couple of years with continuous injuries,... Read More »

This years training and competition's have been unlike no other year, with group training being suspended for multiple months and no complete track season or cross country season ahead my approach this... Read More »

Once again I am very grateful to have received another grant from JHMT, I am very fortunate for the continued support over the past few years.

This grant will be put towards training equipment throughout... Read More »

At the start of this year I had been struggling with a few niggles, meaning I was not at the level of fitness I would have hoped to have been towards the end of the cross-country season. Following this,... Read More »

Just received another grant from the JHMT, and I am extremely grateful for the help and support once again. This grant will go towards training equipment and costs, including travel expenses to and from... Read More »

Start of a new season

With the help of this grant I have been able to purchase new clothing and footwear in preperation for the up and coming cross country season which commences in the next couple of months. These additions... Read More »