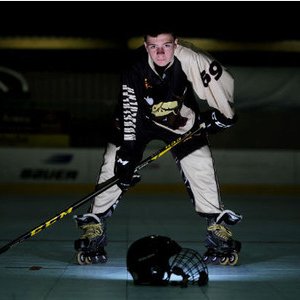 Finlay Walker is 14 years old from Wigston and has been selected to play roller hockey for GB in the AAU Junior Olympics in Hawaii in July 2016. He plays for the Midland Mooseheads inline hockey team, in Lutterworth, Leicestershire.

The Hawaiian games are run by the Amateur Athletic Union (AAU), one of the largest, non-profit, volunteer sports organisations in the United States.

Finlay, who attends Wigston Academy, is a prolific striker for his club side having only taken up the sport three years ago.

He said: "I've been roller skating since I was young because my mum loves it. She used to go down to the roller discos at Granby Halls, in Leicester. I sometimes find studying quite difficult but roller hockey is something I've been able to excel at – it's given me a lot of confidence.

'"The JHMT Inspire grant is vitally important as it's a non -funded sport and every bit helps towards playing kits and travel costs. Apart from being selected I've never been to Hawaii before and am so excited about going there."

Simon Taylor, Inspire lead, said: ' Finlay's award demonstrates the diversity of the scheme where we are keen to support people who are fulfilling their potential and setting an example to others in so many different ways.

Finlay Walker does not have any blog entries.