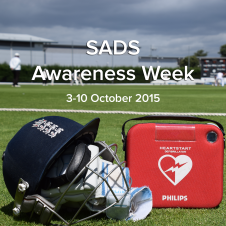 The campaign – which is urging people to #beHeartsafe – marks the third annual SADS Awareness Week, which takes place from 3-10 October.

And a major conference on SADS, with delegates including doctors and sports professionals, takes place in the run-up to the week on Friday (2).

It's all the work of the Joe Humphries Memorial Trust (JHMT), a local charity set up in memory of Joe, 14, from Rothley, who collapsed and died suddenly while out jogging in October 2012.

Chair of the JHMT Steve Humphries said: "We're urging people to #beHeartsafe and learn CPR, so that they know what to do if someone collapses in an emergency. We're also urging sports professionals including community coaches, players and officials to learn these vital CPR skills.

"Now we know that seemingly fit and healthy young people can be susceptible to undiagnosed heart conditions, triggered by exercise, parents need to know that their children are in the safest possible environment when they go off and play sports. This is why we're also lobbying sports clubs and community venues to fit defibrillators, preferably placed in an external cabinet to enable 24/7 access for the wider community. We'd like to see them become as common a sight as fire extinguishers – that has to be the goal."

There's also a major conference for medical and sports professionals on Friday 2 October, examining the issues around sudden heart death.

Dr Ffion Davies, the Trust's medical lead and a consultant in emergency medicine at University Hospitals of Leicester NHS Trust, said: "We are teaching medical and nursing staff, sports and schools staff, about why 12 teenagers and young people per week in the UK die from their heart unexpectedly stopping. This is caused by electrical problems in the heart, not by things like smoking and obesity, which cause heart attacks in older people.

"We will be teaching everybody how to save a life, including basic CPR skills and how to use defibrillators, which are more and more available in public places. We will be teaching about the warning signs that someone has one of these life-threatening conditions, such as fainting during sport. But we want a positive message about the health benefits of doing sport. Play sport, but play safe!"

SADS Awareness Week coincides with Rugby World Cup games being held in Leicester – which is fitting as the Trust's patron is rugby legend Martin Johnson.

Martin said: "I'm proud to back the #beHeartsafe campaign and SADS Week 2015. This is such an important cause, it's vital that we raise awareness of sudden heart deaths in young people and campaign for sports clubs and other community groups to #beHeartsafe.

"Having access to a defibrillator is key as is ensuring players and officials, as well as coaches, are familiar in how to use one and also have basic CPR skills. This should form part of a sporting club's duty of care to protect players as well as everyone else involved in sport and recreational activity.

"SADS Week this year coincides with Leicester hosting games for the Rugby World Cup. I want to share the message with the rugby family in Leicestershire and beyond that they can join other sports clubs in learning CPR, getting life-saving equipment in place and joining us in the fight against SADS."

SADS Awareness Week 2015 will be packed full of supporting events to raise awareness – and funds – for JHMT. These include:

Lend your support by tweeting: I'm getting behind @JHMTorguk 's campaign to tackle SADS and #beHeartsafe… or tweet a selfie with the same message.

You can also visit the SADS Awareness Week Page: www.jhmt.org.uk/sads-week