Leicester City, Tigers and Riders Fans Learn How to Save Lives

Leicester City, Tigers and Riders Fans Learn How to Save Lives 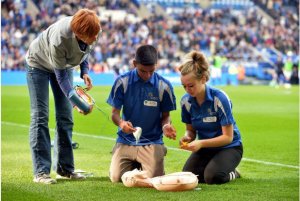 They urged fans at the King Power and Welford Road stadiums and at Leicester Riders match at Loughborough University on Saturday(11) to stay in their seats at half time to learn about the techniques and the use of defibrillators.

CPR stations were placed around the stadia with experts giving on-pitch demonstrations in how to save a life using mannequins.

Alan Birchenall said: "It was a brilliant week, the feedback from the public at the King Power, Tigers ground and Riders crowd at Loughborough University was fantastic.

"The target we were hoping to reach before we started was 40,000 and we made that at the three venues. Our intention was to raise awareness of CPR and I think we achieved that.

"Doug Skehan was at all three venues and it was a privilege to work with him, this wouldn't have come off without him."

Dr Skehan, of Leicestershire Heartsafe, which was launched earlier this year by the Joe Humphries Memorial Trust and the East Midland Pacemaker Fund , said of the 30,000 people who have witnessed having cardiac arrests each year in the UK, just one in 10 survived.

This compared with one in four in some other countries where CPR and the use of defibrillators was more widespread.

In February, Leicestershire Heartsafe launched a pioneering scheme to turn children across the county into a "generation of lifesavers".

Dr Skehan said: "We only had one piece of negative feedback in the form of a Tweet by someone saying they didn't want to go to a sporting venue to listen to something like this - but at least they got the message.

"I felt that on every occasion a good proportion of the crowd was paying attention and at all of them we got a good round of applause."

He added: "Every door we've knocked on has been opened to us.We are already busy in schools.

"A major part of the campaign is to get to the younger generation. I think it was a boost for the school students who took part in the demonstrations, it certainly honed their skills, performing in public and that will have a ripple effect when they go back to their schools."

He added:"We probably hit more than 40,000 with the demonstrations and got the wider publicity to get the message across to a sports audience and beyond.

"We've got our schools programme to deliver, but that won't be enough, we need to expand beyond schools.

"We are looking to expand into the workplace, in first aid training, scouts and other organisations.