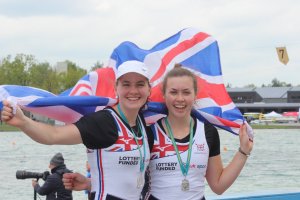 I was selected to represent GB at the Munich Junior Regatta on the 4th and 5th of May. All the top European nations, plus crews from Asia were present. On the Saturday I was racing in a double sculls with Liv Morgan. This was our first 2km race together, and compared to other crews, were a relatively new combination. There were 18 crews in our event and only 6 boats could make the medal final so racing was intense. We raced our heat on Saturday morning, and comfortably made the A-final. We then had a couple of hours to relax before the final. We were in 4th place at halfway, but worked our way through the field to take the silver medal, behind Germany but ahead of the Czech Republic, Slovenia, Switzerland and Germany's second boat. This is the best result GB has had in this event for some years!!!

On day 2 of the Munich Junior Regatta, I raced in the quad sculls with Liv Morgan, Jess Read and Emma Dabinett. Once again all the top European nations were entered, this time there were 12 entries, so the top 3 boats from each heat would make the final. Competition was fierce, and the race would be the second time we had ever rowed in this combination, and the first time we would be racing. We came through our heat comfortably, and then went back to the hotel to relax. We were the 5th fastest qualifiers into the final so we knew we were going to have a tough race on our hands. Despite having a problem at the start, we recovered well and had a really gutsy race to move from last place after the start to win a bronze medal in the final stages of the race!!