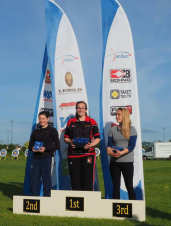 The outdoor season has begun well. I won my first senior outdoor competition at Matlock and came 2nd in a big tournament run by Staffordshire Archery. But my biggest success was in the first two stages of the National Series. All the top archers compete over 6 stages for a place in the National Series Final, which is the big domestic event in our sport, along with the National Championships. In the 1st stage I finished 3rd, which I couldn't quite believe. There were so many great archers there that I went with no expectations. My ranking round was a bit lower than I would have liked, but I definitely pulled it back in the head-to-heads and I was very pleased with the end result.

My ranking round in the 2nd stage on Sunday again wasn't as good as I hoped it would be, but the conditions were difficult and I was pleasantly surprised to find I'd ranked 6th. I really seemed to get in the zone in the head-to-heads and I made it to the final. Although I lost the match I was really pleased to finish 2nd. This means that I am currently leading the National Series rankings after 2 of the 6 stages. This exceeded all my expectations and I can't wait for the rest of the season.

In the photograph, that's me on the left with my trophy for finishing 2nd on the Sunday.