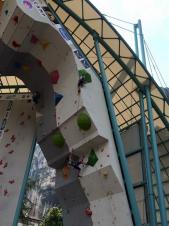 From the 26th of August to the 6th of September I stayed and competed in Arco Italy for the youth world climbing championships. as a member of the GB Climbing team I was selected for this competition, the selection was based on how well we had competed in National and European competitions.

The competition was based on two qualifiers a semi-final and a final. in order to make the semi-final you had to make a top 26 out of around 100 competitors in the world, and then top 10 to make the final. going into to the first qualifier i was really nervous as i had never competed in a competition with so many nationalities and people from all over the world. I was extremely dissapointed with my first climb as I made many mistakes which put me in the bottom 10, I thought that I could not come back from this and that I had climbed the worst I have ever climbed in front of a huge audience.

The next day I was really hoping to climbed better, I watched as many people got onto the climbed and fell off in entirely different spots all over the climb. I hoped that I would not be as nervous as the day before and that I might actually climb well on this climb. I was in the bottom thirty too get on the route and climb it. I had managed to get to the first hard section of the route were I felt that I could fall off whilst watching other competitors, however I felt fairly comfortable on it and manged to climbed past, I came to a part in the route in which I struggled to due to my height and really had to fight to stay on, I didn't want to come off here as I new that I could do better, I manage to get past the moves and then I faced that part of the climbed in which many good competitors fell off, the moves were hard and the holds were small but I managed to do the moves and out climb my team mates in my age group. I eventually came off the route but were many of the best competitors in my age group got to. I came off the route and new that I had climbed well and felt a lot of relief to have climbed so well on the climbed and see that there was bunch of top American climbers cheering me on!

I had made a top 20 position on that climb in the world! I couldn't believe that on one climbed I could come 90th and the next 20th, my first world championships and I had shown myself that I could do it. Because of my 2nd climbed I managed to overcome more than 50 positions and I finished the whole competition in 47th position. I felt happy with this result although it isn't a podium it was my first time competing on such a large scale, and i showed my self that all I needed to do was keep calm and if I had of climbed just like I did on he 2nd route on the first I would've made semi-finals. I was happy with the competition as I had shown myself that i could climb as hard as the best climbers around the world, and it gave me something to work towards (controlling my nerves) because if had of done that i might have climbed better on the first route. overall the year has given me inspiration to really train hard and hopefully next year with the experiences I have gained, there might be great results in all my international competitions next year.