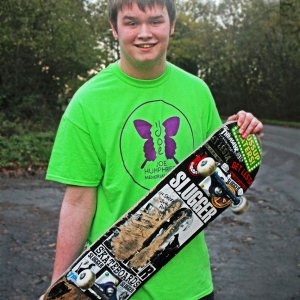 Inspirational young Oliver Aston, 14 years old, is a shining example of the power of the human spirit when it comes to overcoming adversity of the highest degree.

Oliver, with support from his loving family, have overcome some major health and life threatening issues including bleeds on the brain which left him paralyzed in his left leg but he's since learnt to walk again. He has been left with epilepsy, partial vision (loss of peripheral fields) and facing even more surgery as his brain hasn't responded to the treatment as it was expected. He continues to be at risk of further bleeds and has many seizures and absences.

Mum Yvette said: 'Oliver is such a positive person and wants to become a neurologist when he leaves school so he can give back some of his "luck" to others who may face brain surgery. Oliver undergoes tests frequently and these are often painful and exhausting for him. He has been unwell now for over 9 years of his short life. But doesn't complain, just worries.'

The Trust's Inspire grant has enabled the family to buy a new laptop to enable Oliver to work on his one true love which is filming on his beloved VX 2000 and 2001 cameras. He is also a very keen skateboarder and loves to record and edit clips of his friends skating and is at the moment making a DVD.

This has taken him over 2 years and he spends hours and hours editing his work. He puts the clips to music and it is his lifeline away from the difficulties he has to face.

Simon Taylor, JHMT's Inspire Awards lead, said ' We are absolutely delighted the through Joe's Inspire Awards, the grants can make such a difference to other young people's lives like Oliver. It is a fantastic testimony to Oliver that despite the difficulties he has experienced he is approaching matters so positively and is full of ambition . A truly inspirational young man'.

Oliver Aston does not have any blog entries.