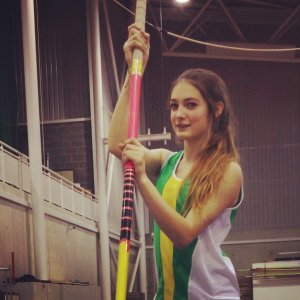 My name is Daisy Barnes and I am a 16 year old pole vaulter living in North Leicestershire. I got into pole vault after being a gymnast for many years, and probably not surprisingly many of the very best pole vaulters have a gymnastics background.

In the 3 years since taking up pole vault, I have held the title of Leicestershire County Champion every year, hold all the female records for Pole Vault at County Level, have been the Midlands Outdoor Champion in 2015 and Midlands Indoor Champion in 2016 and 2017. I was selected solely as the only pole vaulter to represent the England Midlands Team in the 2016 UK School Games and made qualification for the English Championships and the English Schools Championships in both 2016 and 2017.

I train 3 times a week at the High Performance centre at Loughborough University, where I hope to go to University to study Fine Art (not sport ironically) but also so that I can continue my pole vault training.

In my first year as a pole vaulter I was awarded runner-up at the Leicester Mercury Young Sportsperson of the Year, and by the end of my first six months in the sport and my first season I had cleared a Personal Best of 2m70cm. By the end of my second season I had cleared 3m10cm despite a bout of glandular fever which took me out of training for 4 months. This season I have upped my training and conditioning as I became an Under 20- even though I am very young my birthday falls late in the academic year and so I have had to work extremely hard to make my mark on the UK rankings. At this point in time, I am currently ranked 11th in the U.K. as an Under 20, already 7 places higher than I ranked at the end of my time as an Under 17. I am consistently jumping 3m50cm this season and placed 7th at the English Schools Championships in July 8th. My target for the end of the year is to clear the 3m60 which I know that I can clear easily when the mind games of a competition situation aren't at play. My target for achieving in my next two years as an U20 is to reach the prestigious height of 4m. The grant provided by the Joe Humphries Memorial trust will go some way to helping me to achieve this, as at present I am still only jumping on a 13ft pole. To be able to buy my own longer pole at the weight and flex that I need will help me to make gains on those ranked above me who are jumping off 13ft7 and 14ft poles. I am heading off to Sri Lanka next week to volunteer on a Sports Programme for children for a month, but when I return I will be able to start training on my new pole and focus on my Autumn training and conditioning to try and chip away at my target. Thankyou so much to the Joe Humphries Memorial Trust for believing in me (and taking some of the financial pressures of my sporting ambition off my mum) in order to help me achieve my goals.

I recently was attended two day training camp at Lilleshall National Sports Centre for England Under 18.

It was another good experience and a chance to play with other elite players. As a squad we are now... Read More » 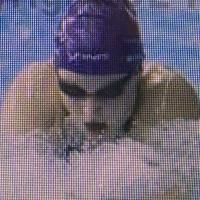 I now have three weeks off training time to relax,have a holiday and spend some time with family and friends.

I will start back training at Loughborough on August 28th for one week before I travel out to... Read More »