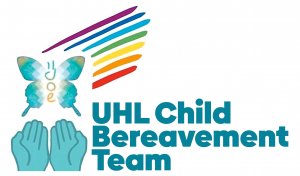 Bereaved families at Leicester's Hospitals mourning the loss of a child will benefit from the support of a dedicated Childhood Bereavement Liaison Officer, thanks to The Joe Humphries Memorial Trust (JHMT).

This post has been funded by Joe's Trust (JHMT) and exists to ensure that families who experience the death of a child within UHL between ages 0-18 (excluding maternity and neonatal deaths) have clear support in the immediacy and coming months after a death.

The Joe Humphries Memorial Trust was set up by parents Steve & Angie Humphries after the death of Rothley teenager Joe Humphries, who died from SADS while out jogging with a friend in October 2012. Every week in the UK at least 12 fit and healthy young people die from cardiac arrests.

"As we all know, the death of a child and its impact on the family and staff involved can be profound," says Amy.

"My role is to liaise with services on the family's behalf and act as their 'listening ear. I will help them navigate their way through processes but also with any referrals for formal support, essentially providing what Joe's parents described as 'a helping hand' during this difficult time."

"Following the death of a much-loved child, it is impossible to take on board any information which is received in the immediate aftermath of the loss," they say. "The death itself is just too huge to process let alone being able to absorb anything else at all.

"Amy is exactly the person we needed when we lost our precious son Joe. We are delighted that the Joe Humphries Memorial Trust - through the amazing work of our supporters - has enabled her vital role of guiding the bereaved through the often harrowing and complex information which needs to be fully understood by heartbroken families following such a death."

"As we mark SADS Awareness Week, we'd like to sincerely thank The Joe Humphries Memorial Trust and all of their supporters for helping to fund this important post," says Lisa.

"For those families facing the unthinkable, having a compassionate, informed person like Amy to lean on for support will help to take away some of the additional worries and stresses put on bereaved families during the most difficult of times."