Cricket Club Becomes Heartsafe with the Help of JHMT

Cricket Club Becomes Heartsafe with the Help of JHMT 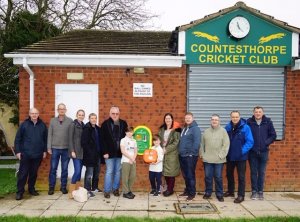 Countesthorpe Cricket Club has funded the new defibrillator thanks to donations from the Leicestershire Cricket Association, Pirelli and Countesthorpe Parish Council – and has also put its own club funds towards the project.

The external cabinet which will keep the defibrillator safe has been part-funded by the Joe Humphries Memorial Trust (JHMT), which works with sports clubs and community groups to raise awareness of sudden heart deaths, particularly in young people.

The JHMT is a local charity which was set up in memory of Leicester teenager Joe Humphries, who collapsed and died while out jogging near his family home in Rothley. Joe was a victim of sudden arrhythmic death syndrome (SADS) – a group of lethal heart diseases which can cause sudden cardiac death in young people.

The Trust works tirelessly to campaign for a better understanding of sudden, unexpected death in young people, and has campaigned for compulsory CPR training in schools and defibrillators in schools, community venues and sports clubs.

Club members at Countesthorpe have also taken part in Joe's Mini HeartStart for Sports, a JHMT training programme which aims to ensure sports club members – including players, officials and volunteers – know how to use a defibrillator and can perform CPR in an emergency.

Terry Swingler from Countesthorpe Cricket Club said: "I was at another club watching a game when one of our members collapsed. Fortunately, it turned out that it wasn't a cardiac arrest, but if it had been, the gentleman in question could have died. Following this experience, it became obvious that a defibrillator was an essential part of any club.

"We're very pleased to now have a defib on site and to join so many other Leicestershire cricket clubs in becoming heartsafe. While we hope we will never have to use the training we have had from the JHMT, if an emergency happens, we will be prepared."

Countesthorpe Cricket Club, which is currently in Division 2 of the Everards Leicestershire & Rutland Cricket League, has around 400 members and covers an age range from six to 90 years. The club was formed in 1958 as an amalgamation of Countesthorpe Wanderers and Countesthorpe Methodist cricket clubs.

Steve Humphries from the JHMT said: "Congratulations to Countesthorpe Cricket Club for all their hard work behind the scenes to help create a heartsafe environment for club members, visiting teams and the local community.

"There's still much work to be done to help create a heartsafe culture across the wider Leicestershire sporting community, including cricket, local football, rugby and other community sports clubs and groups. Sudden cardiac arrest can strike anyone, anywhere, anytime and of any age, including seemingly fit and healthy young people. It's vitally important everyone learns CPR and knows how to use a defibrillator – and that defibrillators are readily available in case of a cardiac emergency. Being prepared is key."

Last year, the Everards Leicestershire and Rutland Cricket League's premier division made it a league requirement for all premier league clubs to sign up to the Leicestershire and Rutland Heart Awareness in Cricket (HAC) partnership. As part of the requirements, all clubs must have a defibrillator at their grounds and provide CPR and defibrillator training for the membership of each club, including players, coaches and officials.

Andy Hibberd, Leicestershire County Cricket Senior Club Network Officer, said: "Congratulations to Countesthorpe Cricket Club on their efforts to join an ever-growing number of heartsafe cricket clubs in Leicestershire and Rutland. Countesthorpe is a club that I have fond memories of and keep in regular contact with, playing there for over 20 years. I know a lot of hard work has gone into this project from a number of volunteers, particularly James Popplewell and Terry Swingler. It's very pleasing to see the club prioritising the safety of its members, visitors and the local community around the Bassett Avenue ground. I am really encouraged to hear more and more cricket clubs getting involved with the Heart Awareness in Cricket project and hope this trend continues. If clubs are interested, please don't hesitate to get in touch for support".

To find out more about the work of the Trust, apply for training and support, or to help out with the charity's work, visit the website at www.jhmt.org.uk