Aspiring Olympic kitesurfer among those to benefit from JHMT Inspire Awards

Aspiring Olympic kitesurfer among those to benefit from JHMT Inspire Awards 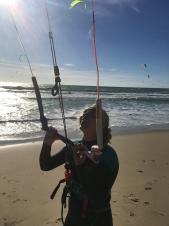 Inspire Awards are handed out to young people aged 13-21 from Leicester and Leicestershire to help them fulfill their ambitions in the fields of music, arts, sports, entrepreneurism and community endeavour. It's a small grants scheme set up by local charity the Joe Humphries Memorial Trust (JMHT), awarding grants of up to £500 a time.

They include 20-year-old Sophie Otter, from Lutterworth, who hopes to represent Great Britain at kitesurfing in the Paris 2024 Olympics.

"I started sailing at age 10, progressing to be selected for the British Youth Sailing team," Sophie explains. "Kitesurfing will be included in the 2024 Olympics for the first time, and I have been selected into the British Kite4Gold campaign due to the similarity between sailing and kitesurfing.

"My £300 grant from the Inspire Awards means that I am able to afford equipment and training costs. These are vital for me to continue progressing over the winter period."

Seventeen-year-old Andrew Moran, from Narborough, is a guitarist who has performed at local festivals, open mic nights and at charity events, as well as busking in Leicester and Birmingham. Andrew is studying on a two-year vocal development course.

Andrew said: "My £250 Inspire grant will be a big help to me as I continue to work towards buying a new guitar. My live performances will sound so much better and it will make me more confident as a musician.'

Young Leicestershire tennis star Anna Chesca, 17, from Loughborough, has made significant progress in her tennis. She's currently the best ranked and rated female player of her age in the county, and plans to use her £250 Inspire Award to reach ambitious goals, which include plans to win her first junior international tournament.

Anna said: "I currently train at Loughborough University while studying A-levels. The Inspire Award has allowed me to compete in more tournaments across the UK, including reaching the quarter-finals at an international ITF event in Edinburgh."

Abigail Gray, 17, has learning difficulties but hasn't let anything hold her back in her passion for basketball. Abigail has been selected to represent Great Britain at the Special Olympics World Games in Abu Dhabi in March next year. This will fulfil her lifetime ambition to represent her country at one of the world's largest sporting events, with more than 7,000 athletes taking part.

A £350 Inspire donation towards the cost of her training, equipment and other pre tournament costs has made all the difference to Abigail in fulfilling her dream. "I have always wanted to represent my country at basketball and now I have the chance. I am really excited!" she said.

Brandon Fletcher, 17, from Leicester, has been awarded £300 from Inspire to help him pursue his passion for acting and musical theatre.

A member of the Curve Young Company [CYC] for Musical Theatre, Brandon is currently appearing in White Christmas at Curve, and has already taken prominent roles in productions of Oklahoma!, Fiddler on the Roof and a 1940s cabaret show, in which he performed a tap duet.

"With no prior experience in tap, I bought a pair of tap shoes and taught myself," he says. "I was continually optimistic about taking up an opportunity which would see me become a more rounded performer."

JHMT Inspire Awards lead Simon Taylor said: "We are always seeking to recognise up and coming talent and there is no question that we will be seeing a lot of these brilliant young people in the future.

"We're delighted to support young people in fulfilling their ambitions and I think it is us, as judges, who are truly inspired when we see the amazing things they are aiming for.

"These young people are all extremely worthy winners of their awards and demonstrate how our scheme is reaching a diverse range of individuals, who then go on to inspire others."

The JHMT works to raise awareness of sudden arrhythmic death syndrome, a group of genetic heart conditions which can strike at any time, particularly in otherwise fit and healthy young people. SADS conditions occur because the electrical system of the heart is not working properly, so that the heart beats with an abnormal rhythm.

As well as providing CPR training and helping to fund defibrillator boxes for local community and sports groups, the JHMT runs the Inspire Awards scheme to ensure that helping young people from the city and county to fulfill their dreams is part of Joe's legacy.

To find out more, visit www.jhmt.org.uk