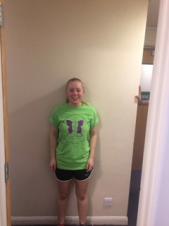 Alice Humphries, a former pupil at Hind Leys Community College, is currently studying at Brighton University, and is training for the Brighton Marathon on 15th April.

Alice, 20, from Shepshed, will be raising money for the Joe Humphries Memorial Trust (JHMT), the charity set up in her friend's name. Joe, from Rothley, died aged just 14, while out on a training run near his home.

Joe was a victim of sudden arrhythmic death syndrome (SADS) – a group of lethal heart conditions and diseases which can cause sudden cardiac death in seemingly fit and healthy young people.

Since Joe's death in 2012, JHMT has campaigned tirelessly for greater understanding and awareness of SADS, as well as providing vital life-saving CPR training for schools and sports clubs.

Alice said: "I feel privileged to be able to run the 2018 Brighton Marathon for the Joe Humphries Memorial Trust and raise money for such an important cause that is close to so many people's hearts.

"I've always loved playing sports and the charity has made me aware of SADS – an issue young sportspeople may become victims of. I know the charity is doing a brilliant job, raising awareness of SADS and teaching people what to do to save countless lives in the future, and I want to help the JHMT carry on with this amazing work.

On her training, Alice said: "I have been training with other university mates, who have also entered the marathon this year, as well as doing several longer solo runs to prepare for the distance.

"Training in Brighton is always fun due to all the hills which seem impossible to avoid, and the extremely unpredictable weather! I often end up getting a lot of strange looks when I leave the house in a vest and shorts while its sunny only to be caught running in rain, wind and hail a few minutes later!

"This will be my first marathon, and I am certainly beginning to realise just how challenging it is going to be, but I know it will be 100% worth it. Training has flown by and I now can't wait until the actual day."

Steve Humphries, chair of the JHMT and Joe's dad, said: "Alice was one of Joe's friends, and it is so fantastic that she is willing to literally go the extra miles to raise awareness of the silent killer SADS, which affects fit and healthy young people 12-35 years old.

"Thanks to Alice's marathon efforts, we'll be able to raise further awareness about this group of inherited heart conditions which can strike without any warning.

"Sudden heart deaths aren't inevitable – they're preventable. We need more bystanders to perform effective CPR and know how to use a defibrillator, and we need more publicly available defibrillators in our communities.

"In this way, we can have a positive impact on the devastating figures that fewer than 1 in 10 people survive cardiac arrest in the UK, including more than 650 avoidable deaths of young people."

Brighton is one of Europe's largest city marathons, attracting 12,000 runners, many of whom are running for charities.