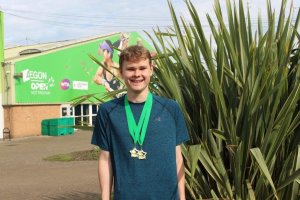 Swimmer Laura Sharp, from Sileby, and tennis player Matthew Chilvers, from Broughton Astley, are among around 2,600 athletes heading for the largest sports event to take place in Great Britain for people with an intellectual (learning) disability.

The Games take place in Sheffield from 7-12 August, giving all athletes who take part the chance to achieve their ambitions and demonstrate their abilities to the community.

And local charity the Joe Humphries Memorial Trust (JHMT) has stepped in to help both Laura and Matthew get to the Games.

The JHMT runs the Inspire Awards, a small grants scheme that helps inspiring young people fulfill their ambitions by giving them cash grants. The JHMT set up the scheme in memory of Joe Humphries, 14, who sadly died of sudden arrhythmic death syndrome (SADS) while out jogging near his Rothley home.

Nineteen-year-old Laura has competed previously in two Special Olympics Summer Games as a gymnast, including at the games in Leicester 2009. The time round, Laura – who has a learning disability and autism – will be competing as a swimmer.

One of the biggest barriers to overcome for Special Olympics GB athletes is raising the required funds, plus attending training events and other competitions to prepare for the games. Laura's £200 Inspire Award will help her to meet these costs.

Samantha Sharp, Laura's mum, said: "The games have given Laura a chance to compete on a level playing field but also, more importantly, given her confidence, determination and friendships that will last a lifetime."

Simon Taylor, Inspire Awards project lead, said: "Laura is an inspiration to us all given that she will now have represented our region in two very demanding sports, with rigorous requirements for training and levels of personal commitment. We wish her well and look forward to hearing from her after the event."

Matthew Chilvers, 21, has been preparing for the Special Olympics GB National Games by competing in regional tennis tournaments across the country. He trains in a group with the men's team at Desford and with the East Midlands Special Olympics Squad in Nottingham.

His £200 Inspire Award helped him travel to compete, and to have extra one-to-one coaching which in turn boosted his skills and confidence.

Matthew said: "Having the opportunity to make improvements each week meant I felt well prepared going into the Special Olympics. The Special Olympics motto is 'Let me win. But if I cannot win, let me be brave in the attempt.' The Inspire Award helped me to train as hard as I could to do my best in Sheffield.

Simon Taylor, Inspire Awards project lead, said: "We gave this award to Matthew as he is a great example to other young people through his ambition and commitment to succeed. We look forward to hearing from him following the Special Olympics tournament."

The Inspire Awards are all about helping talented young people to fulfil their ambitions, whether their area of interest is sport, art, entrepreneurism or community activities. To find out more, visit www.jhmt.org.uk/inspire