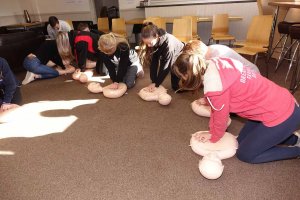 The JHMT, a local charity, works closely with sports organisations, including LCCC, to train students and sportspeople in CPR and defibrillator skills. A cardiac awareness day was held at the club in September 2016 for staff, players and the public, and a further session was held at the ground in January.

That session was to launch the Heart Aware Cricket (HAC) Scheme for clubs in Leicestershire and Rutland, a community project to reach out from LCCC to train and equip clubs in the event of sudden cardiac events.

The partnership has been inspired by the JHMT, which works tirelessly to raise awareness of sudden heart deaths following the death of Joe Humphries, aged just 14, from sudden arrhythmic death syndrome (SADS) in 2012. SADS can strike anyone at any time, particularly otherwise fit and healthy young people.

The new equipment will allow quicker access around the ground as well as allowing the public 24 hours access to the one situated at the main entrance on Curzon Road. The club also possess three AEDs that are mobile with the teams.

It is appropriate that the new automated external defibrillators AEDs have been installed ahead of the global tournament as JHMT and HeartWize have worked closely with women's cricket.

England international Sarah Taylor was the face of the Don't Get Caught Out - be prepared cricket poster which formed part of the JHMT's SADS Awareness Week campaign in 2015 to create heart-safe sport.

The partnership with JHMT, HeartWize and LCCC has also helped to drive an initiative in local clubs, which the women and girls teams at Sileby Town have been a part of. Leicestershire and Rutland Everards Premier League clubs are encouraged to house defibrillators and be trained to provide the confidence to use CPR and defibrillators.

Sileby Town were the first club to sign up to the HAC scheme to receive the training and get an AED on site, and their women and girls cricketers were involved in training sessions on the Thursdays of June 8 and 22.

Their women and girls teams joined forces with some of Sileby Town's under 19 squad to undertake training, the purpose of which is to provide lots of new people with the skills and confidence to potentially help save a life in the future.

Rob Leather, Head of Player Support and Head of Physiotherapy at Leicestershire CCC said: "It has been fantastic to work with Steve and the JHMT on this initiative. Leicestershire County Cricket Club are proud to be leading the way and encouraging local clubs to join up, and the additional equipment at the ground is vital in helping to create the safest possible environment."

Steve Humphries, chair of the JHMT, said: "We're so pleased to be working with LCCC, local cricket clubs, women's cricket teams and Heartwize to ensure that local cricketers can play and compete in a heart safe environment.

"Already, LCCC's Heart Awareness Cricket programme has started to make some headway into raising the standards of 'heart care' at both the professional and community levels of the game so all members of the cricketing community can play in the safest possible environment. Together, we must keep spreading the message that sudden heart deaths aren't inevitable, they're preventable.

"We'll continue to work to raise the standards of heart care across all levels of sport as sudden cardiac arrest is unpredictable and can strike anyone, anyplace and anytime without any warning, including seemingly fit and healthy young people aged 12-35. It's vitally important that community sports clubs are ready, prepared and equipped to deal with a cardiac emergency. After all, it could mean the difference between life and death."