DSU unveil first public defibrillator at the heart of campus

DSU unveil first public defibrillator at the heart of campus 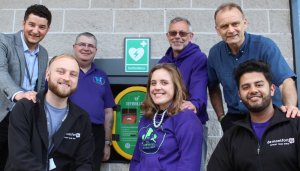 The move, which will make the heart of campus a safer place for students, staff and the public alike, is thanks to DSU's unique partnership with the Trust, set up after the death of 14-year-old Joe from sudden arrhythmic death syndrome (SADS) in 2012.

Steve, who is also an honorary life member of the students' union, said:

"One lost Joe is one too many. We know that right now the statistics aren't very good.

"We know that SADS can affect young people, and so this defibrillator is just another key marker in helping create a safer community.

"This is a fantastic statement and, most importantly, driven by our students."

Statistics show that 12 young people aged between 12 and 35 in the UK die each week from SADS, a group of lethal heart diseases which can cause sudden cardiac death. If CPR is started immediately, with the assistance of a defibrillator such as the model now fitted to the side of the Campus Centre, the majority of victims could be saved.

DSU's partnership with JHMT was formed in 2013 under the direction of then VP Student Activities, Chris Mutton, who attended the same Leicester school as Joe and Lauren. The link-up between the two organisations continues, with sports clubs and other student groups regularly raising money for the Trust through star-studded sporting fixtures and other fundraising events.

"This is an essential partnership, as both DSU and JHMT have the same aims in keeping everyone safe. To have this defibrillator is a real statement, and while we hope that the worst doesn't happen, this shows we are ready to act.

"This is just the start, and we will continue to work with JHMT to train student leaders and make our campus heart safe."

Joe's sister Lauren was also on hand at the launch of the state-of-the-art equipment, and she explained that it was reminding her father 'not to forget about students' that kick-started the Trust's push into universities across the UK.

"I was studying in Newcastle when it happened,"

"I was conscious of the fact that SADS doesn't just affect Joe's age group – I've got the symptoms too – so I said we need to think about students, too.

"This equipment, more than anything, is an awareness-raiser to help make people more familiar with what it is and when it should be used."

"DSU has, over the years, been tremendously supportive and embraced the idea that all public areas need access to lifesaving equipment. JHMT wishes to recognise the support given by the students by donating this up-to-date defibrillator and cabinet."

In an emergency, users dial 999 and are given the code to the cabinet – which also relays instructions on how to properly administer CPR.

But a single public access defibrillator on campus is just the start, as explained Ahtesham Mahmood, current VP Student Activities and President-elect.

"I think our student groups have really pushed this through," he remarked.

"As the regional British Universities and Colleges Sport (BUCS) chair, I will be taking the opportunity to roll initiatives like this out nationally, and I want to conduct a facility audit to find out where equipment is available and how we can do better.

"It's not just at a local level, but an example of how DSU are looking to work with JHMT in trying to spearhead a change on a national stage."