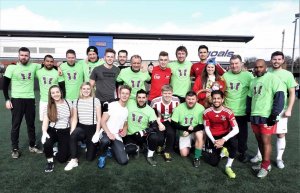 'A HUGE THANKS to all members of the De Montfort Mens and Womens football teams for being such 'GREAT SPORTS' at this year's annual DMU mens and womens football tournament to help Joe's Trust with its goal to raise awareness of #SADS and reduce the incidence of young people, 12 - 35 years old dying from undiagnosed heart conditions.

We are delighted the event was so well attended by members and friends involved with the men's and women's football clubs. Once again congratulations to the Team DMU organizing committee led by Elliott Watts who worked so hard to make the event possible and the forty two teams who took part in the competition.

The JHMT/DSU partnership goes from strength to strength as the vital work goes on to create a heart safe community across the University campus. As shown by the strength and depth of this year's JHMT team demonstrates how important the DSU efforts are so much appreciated and important in the Trust's ongoing fight to reduce the incidence of young people, 12 - 35 years old dying from undiagnosed heart conditions.'

Thanks also to James (Butch) and his team at Goals, Evington for being such supportive and welcoming hosts and helping making this possible. A BIG THANK YOU you also to members of the JHMT Select team who gave up their time and support to give the event another actioned packed opening match.

Thanks also to Leicester Mercury and BBC Radio Leicester for the local media coverage and JHMT photographer Stephen Baum for capturing some of the highlights on camera.'