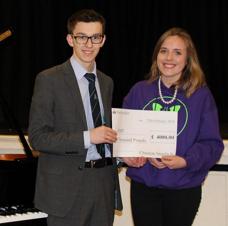 Christian Smaditch, a Dixie Grammar School student from Leicester Forest East, was presented with the prestigious Whitbread Memorial Prize at the House of Lords.

He won the award – from the Independent Schools Association (ISA) – for his outstanding academic achievement, as well as his extra-curricular accomplishments in music and medicine.

Seventeen-year-old Christian was also awarded £200 in prize money, which he has donated to local charity the Joe Humphries Memorial Trust (JHMT). This generous gesture was immediately matched by Lord Lexden, President of the ISA, who also pledged £200 for the charity.

Presenting Christian with his prize, Lord Lexden said: "I shall remember you for four Ms: music, medicine, mankind for whose welfare you obviously care, and finally for magnificence which sums up your total achievement".

JHMT is a charity which was set up in memory of Rothley teenager Joe Humphries, who died aged just 14 in October 2012.

Since then, Joe's family and friends have worked tirelessly to campaign for a better understanding of SADS and sudden heart deaths, as well as for more defibrillators and CPR training in schools, community venues and sports clubs.

Last year, Christian single-handedly organised a concert for the JHMT, which took place at Leicester Cathedral. He performed himself on piano, as well as organising for other musicians to take part.

The sell-out concert, which opened SADS Awareness Week last October, raised a staggering £4,000 for the charity, to help JHMT in its vital work reducing the incidence of young people dying from undiagnosed heart conditions.

Chair of the JHMT, Steve Humphries, said: "Christian's journey with JHMT started in 2014, when he won the Young Artist of the Year award at the Leicestershire Lord Lieutenant's Awards. This was the inaugural year that the award was named the Joe Humphries Memorial Award.

"Since that time, Christian has been a fantastic supporter of the Trust and has used his considerable talents to help us raise funds and awareness for sudden heart deaths.

"Organising the concert was a truly amazing effort and achievement from someone so young. And donating his recent prize to the Trust is another example of Christian's generosity, kindness and commitment to our cause. We can't thank him enough."

Christian, a former pupil of Chetham's School of Music, started to play the piano at the age of eight and worked successfully through all the grades to achieve a distinction at Grade 8, and a Diploma of the Royal Schools of Music at the age of 14. He has performed in many concerts, events and competitions, both locally and nationally.

He is also accompanist for the Musical Village community choirs and organist at St Andrew's Church, Leicester Forest East.

Christian said: "Since JHMT sponsored the award that I won in 2014, I always try to have them in mind when an opportunity comes up to donate or raise funds for charity.

"Joe Humphries was one of 12 young people whose lives are cut short with no warning every week in the UK, due to undiagnosed heart conditions. I want to help make a positive difference to that shocking statistic."