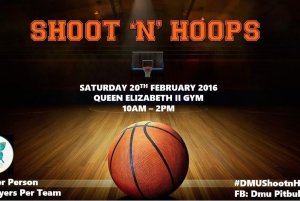 On Saturday (Feb 20), De Montfort University's women's team will be hosting their very first basketball tournament, inviting DMU students, staff and sports societies to take part in a fun and friendly competition to win a number of spot prizes.

It will raise money for the Joe Humphries Memorial Trust (JHMT), which was set up to raise awareness of – and to reduce incidences of – sudden heart deaths in young people.

Leah Caldeira, women's basketball secretary at DMU Pitbulls, said: "We're really pleased to be holding our first-ever tournament for such a worthy charity. The women's basketball team acknowledges and supports the work that JHMT does to help tackle SADS – sudden arrhythmic death syndrome – because we know this is something that is very relevant and important to young people. We believe that more young people should be aware of SADS and the signs of SADS."

SADS can strike at any time, in seemingly fit and healthy young people, and can sometimes be triggered by sports or physical activity. The JHMT was set up in memory of Rothley teenager Joe Humphries, who died as a result of SADS in October 2012.

Chair of the JHMT Steve Humphries said: "We're delighted that DMU Pitbulls have chosen to dedicate their first-ever tournament to the JHMT. Not only is this a very generous fund-raising gesture, but it also helps us to spread our message among the student community – that sudden heart death is a hugely important issue.

"Recognising any warning signs and acting promptly is vital. Early intervention by means of effective CPR and defibrillation can mean the difference between life and death.

"It's essential that more community-access defibrillators are available in our society, because the statistics are shocking. Out of the 60,000 cardiac arrests per year in the community – half of which are witnessed, often by family and friends – the chances of survival are less than 10%. This includes more than 12 young people aged 12-35 in Britain who die each week from SADS and other undiagnosed heart problems."

The tournament will take place at The Queen Elizabeth II Diamond Jubilee Leisure Centre, in Duns Lane, from 10am-2pm on Saturday.