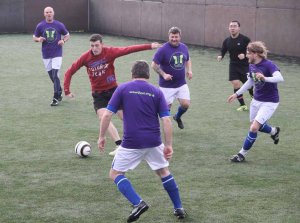 The De Montfort University women's and men's football teams are holding their annual event at Goals football centre – and this year, it will be in aid of the Joe Humphries Memorial Trust (JHMT).

JHMT is a local charity which works to raise awareness of sudden arrhythmic death syndrome (SADS) and other sudden heart deaths. It focuses particularly on preventing death in young, seemingly healthy people who may experience a cardiac arrest in the community, while taking part in sports and physical activities.

To kick off the event, there will be a curtain-raising game between DSU students and the JHMT. Players will include Trust patron and former Tigers and England rugby captain Martin Johnson; boxer Rendall Monroe; former Leicestershire County Cricket player Paul Nixon, former Tigers player Steve Booth and chair of the Trust and former LCFC goalie Steve Humphries.

Students will raise cash for the Trust by paying to take part in the tournament, with proceeds donated to the charity. There will also be a fund-raising raffle, with prizes including a football signed by the current Leicester City squad.

Abigail Battisto, chair of the women's football team, said: "A record 43 teams have signed up to play which is amazing. We're really looking forward to raising funds for the amazing work the Trust does, and we want to make this event our best yet.

"The event is also about raising awareness of sudden heart deaths, and some of the shocking statistics around this issue. More than 12 young people a week, aged 12-35, die in Britain from undiagnosed heart problems. That's got to change."

Steve Humphries, chair of the JHMT, said: It's fantastic to have the students on board for this large-scale, fun sporting event and we're so grateful to them for choosing to raise funds and further awareness about SADS amongst the local student population for the JHMT.

"Young people playing sport can also be at risk of sudden heart death from previously undiagnosed conditions. Being prepared is key. By recognising early warning signs and acting promptly by performing effective CPR and defibrillation within vital minutes of someone suffering a cardiac arrest, they have well over 50% chance of survival.

"That's why the funds raised by this event are so important. They'll go towards providing defibrillators and training for schools, sports clubs and other community venues, as well as helping with the Trust's vital awareness-raising and campaigning work."