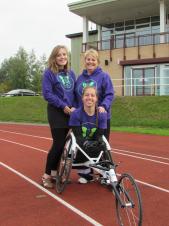 The awards are given out by a panel of judges to help young people fulfil their ambitions and reach their potential in the fields of sports, arts, culture, business and community work.

Young people get awards of up to £500 to help put towards equipment, travel or other expenses associated with pursuing their ambitions.

JHMT set up the awards in memory of Joe Humphries, who died in 2012, aged 14, from sudden arrhythmic death syndrome (SADS) while out on a training run near his Rothley home.

The idea behind the awards is to help other young people fulfil their potential, as tragically, Joe did not get the chance to fulfil his.

Now, as the JHMT marks SADS Awareness Week (3-10 October), the charity is revealing some of the inspiring stories behind the awards scheme.

Paige Murray, age 22, has been given a £500 award to help her with her latest sporting challenge – wheelchair-racing.

Paige, from Braunstone, Leicester, has cerebral palsy, but has never let her disability hold her back, and is already an accomplished athlete, previously specialising in swimming. She also carried the 2012 Paralympic Flame and was a baton-bearer in the Queen's Baton Relay for the 2014 Commonwealth Games.

She said: "I'm fundraising for a custom-made racing chair – preferably with carbon wheels – so that I can continue my improvements in wheelchair racing and compete on a international stage. But it's not a cheap sport – a chair like this will cost me upwards of £3,000, and even tyres are over £50 each.

"The Inspire Awards funding will help me to buy new equipment, contribute to maintenance costs and allow me to continue to attend competition events. This will go a long way to helping me reach my true potential in athletics and achieve my dream of one day representing Great Britain."

Fifteen-year-old Eden Bailey has been granted a £200 award to help her play football at the highest level. Eden is a member of the Aston Villa Girls Centre of Excellence, and travels to matches from her Leicester home two or three times a week.

Eden said: "My Inspire grant will help me to continue to train at a very high standard and ensure I have the best possible training equipment, so that I can be the best I can be. This experience is vital if I'm to progress to a top women's team when I am old enough and really make my dream a career."

Harry Kilburn, 19, from Whitwick, is a young sportsman with a passion for playing bowls. His £150 Inspire Award will help him to enter more tournaments, so that he can achieve a higher ranking and progress further.

Harry said: "I'm really keen to encourage more young people to play bowls, because I know it's often associated with people much older than me. It's my passion, but it can be expensive as I need to continually find funds to cover equipment, travel expenses, tournament and membership fees. Thanks to my Inspire Award, I can keep moving forward and gain the necessary experience to compete at the highest level."

Multi-sports champion Adam Hames, 16, from Loughborough, is fast making a name for himself in both karate and bobsleigh.

Adam is under-16s Aiwakai European karate champion and is the current England under-18s silver medallist. He's also a member of the Great Britain Youth Bobsleigh Team and is ranked sixth in the world.

Adam, who received a £500 award, said: "The Inspire Awards grant will allow me to train more regularly down at the British Bobsleigh push-track facility at Bath University. It's sometimes a struggle to travel such a long way, so this will really help."

Milly Scotchbrook, 15, from Whetstone, is a young swimmer who's full of potential. Having competed earlier this year at the International Children's Games, in the Netherlands, Milly returned with two personal bests, narrowly missing out on some medals, having reached the finals in every race she entered.

Milly said: "I'm extremely grateful to have received a £250 Inspire award. The cost of competing is very expensive – this will help me to enter competitions so that I can qualify for the national championships."

Fourteen-year-old Jarrod Nel, Special Olympics GB athlete, from Loughborough has discovered a passion for horse-riding, which has helped him with his own personal development and self-confidence.

Jarrod said: 'I'm determined to progress further with my horse-riding but like many things in life, it doesn't come easy. My £200 Inspire award will be help me immensely to achieve my goal of becoming the very best I can be and been in the best possible position to do well at horse-riding events and competitions."

Simon Taylor, the Inspire Awards lead, said: "These young people are an example to us all – they're absolutely determined to succeed, whatever life throws at them. We want to be able to make a difference to people's lives in areas where funding might not always be available to them, which is why we're so pleased to be able to help these inspirational young people."