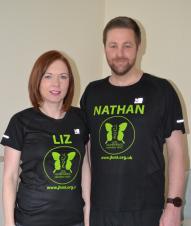 It's a particularly big achievement for 39-year-old Liz, from Syston, because she had to pull out of last year's race due to injury.

Liz said: "I was lucky enough to win a ballot place in the London Marathon in 2014 and decided to use the place as an opportunity to run for the Trust, but I was devastated when I got injured with just five weeks to go. There is an option to roll your marathon place over to the following year, if you are unable to run due to injury, which is what I did.

"I have run four half-marathons in the past but never 26.2 miles; this will be the furthest I have ever run! I train three times a week with the longer runs at the weekends. My last long run before the day will be 22 miles.

"I mainly run on my own as I like to run at my own pace, but I have Oasis, Jimi Hendrix and Michael Jackson to keep me company on my IPod!

"I would like to finish in under five hours, but I'll be glad just to get round at a steady pace and soak up the atmosphere."

Liz's boyfriend Nathan, 39, a petty officer weapons engineer for the Royal Navy, is training for the event at his base in Scotland.

He said: "I'm a regular runner but have been training since Christmas for the London Marathon. I first heard about the Joe Humphries Memorial Trust when Liz was fund-raising for them last year.

"When I heard Joe's story, and the effects that SADS has on so many children and young people in the UK, I felt I had to do something to help. I'm honoured to be representing the Trust in this year's London Marathon and hope to help raise awareness of the Trust and the great work they do."

The Joe Humphries Memorial Trust (JHMT) was set up in memory of Leicestershire teenager Joe Humphries, who collapsed and tragically died while out jogging. Joe was a victim of sudden arrhythmic death syndrome (SADS) – a group of lethal heart conditions and diseases which can cause sudden cardiac death in seemingly fit and healthy young people.

Since Joe's death in 2012, JHMT has campaigned tirelessly for greater understanding and awareness of SADS, as well as providing vital life-saving CPR training for schools and sports clubs.

Liz added: "I wanted to support the Trust after hearing about them through friends and through my work for Kays Medical, which supplies equipment like defibrillators for workplaces.

"After hearing about Joe's story, I thought there must be something I could do to help them achieve their goals. I am great believer in the work they are doing in the community to help break the silence on SADS. The more people that can be trained to deal with life-threatening situations, the more lives could be saved".

Since getting involved with the work of the Trust, Liz has also helped to organize two fund-raising fashion shows and encouraged local businesses such as Next to donate generous raffle prizes to the charity.

"I approached the Force India F1 race team and they kindly donated a factory tour at their Silverstone headquarters, which the Trust will soon be auctioning," Liz said. "Everyone I have approached for help has been so generous."

Steve Humphries, chair of JHMT, said: "I'm always blown away by our fund-raisers' generosity in giving up their time and challenging themselves to help us raise vital funds for the Trust. Liz and Nathan's selflessness is fantastic. Each and every stride they take along the 26.2 mile route will also help the Trust to raise further awareness and expose the dangers of undiagnosed heart conditions and diseases like SADS which claims the lives of 12 young people (12-35 years old) every week in the UK."

To find out more about the Joe Humphries Memorial Trust, please visit https://jhmt.org.uk/

To sponsor Liz and Nathan, go to www.virginmoneygiving.com and search for Elizabeth Donaghy.