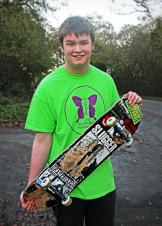 AN inspirational young person who has battled life-threatening health conditions has been granted an award to help him with his film-making.

Fourteen-year-old Oliver Aston, from Newtown Linford, has suffered two bleeds on the brain since he was five years old. He has had three lots of surgery.

One of these bleeds left him paralysed in his left leg, but Oliver has since learned to walk again. He also has epilepsy, vision problems and is at risk of further bleeds.

Oliver loves making films, especially films that show his other favourite hobby ­– skateboarding. But Oliver was struggling to edit his films because of a lack of equipment.

He applied to the Inspire Awards, organised by local charity the Joe Humphries Memorial Trust (JHMT), and received £300 for a new computer to help him pursue his hobby.

The Inspire Awards have been set up to help young people flourish across a wide variety of community, sporting, entrepreneurial and creative arts activities.

They're the brainchild of the Joe Humphries Memorial Trust (JHMT), which works to raise awareness of sudden heart deaths such as SADS – sudden arrhythmic death syndrome.

JHMT was set up in memory of Rothley teenager Joe Humphries, who collapsed and tragically died from SADS in October 2012 while out jogging.

Simon Taylor, JHMT Inspire Awards lead and a partner at local solicitor's Gateley, is on the panel of volunteers that helps decide who will receive Inspire Awards. He said: "We are absolutely delighted that through Joe's Inspire Awards, our grants can make such a difference to the lives of young people like Oliver.

"It is a fantastic testimony to Oliver that despite the difficulties he has experienced he is approaching matters so positively and is full of ambition. He is a truly inspirational young man.

"Oliver is clearly a creative individual whose love of making films helps him to cope with the challenges of his illness. I hope this award will help Oliver to fulfil his potential."

Oliver's mum, Yvette, said: "Oliver is such a positive person and wants to become a neurologist when he leaves school so he can give back some of his 'luck' to others who may face brain surgery. Oliver undergoes tests frequently and these are often painful and exhausting for him. He has been unwell now for more than nine years of his short life ­– but he doesn't complain.

"He loves filming on his cameras and recording and editing clips of himself and his friends skateboarding. It's his lifeline, taking him away for a while from the difficulties he has to face."