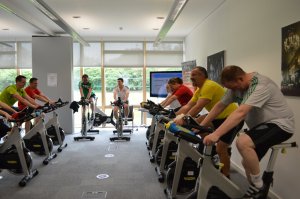 SPORTING enthusiasts have been raising money for local charities by taking part in a virtual tour of Brazil, linked to the upcoming World Cup.

More than 35 people took part in the event, including staff from sports support network Leicester-Shire & Rutland Sport (LRS), their colleagues at SportPark, in Loughborough, and supporters of local hospice LOROS and the Joe Humphries Memorial Trust.

The event raised more than £1,000 to be split between the two charities.

This charity event has been run twice before in aid of LOROS, in memory of Monica Gibbs, an employee at Leicester-Shire & Rutland Sport, who passed away in 2013, aged just 42, following the return of her cancer.

The Joe Humphries Memorial Trust (JHMT) was launched in March 2013 in memory of 14-year old Joe Humphries, from Rothley, who collapsed and died from sudden arrhythmic death syndrome (SADS) while out running in October 2012.

SADS is responsible for the death of 12 young people every week in the UK alone. JHMT aims to raise awareness of the condition and bring about measures to reduce sudden, unexpected death in young people.

As part of the 'virtual tour' event, participants took to the gym and aimed to walk, cycle, row or run a combined distance of 1,898km – the distance between all the venues where first-round World Cup games will be played in Brazil this summer.

Working in half-hour slots and with only two hours to complete the challenge overall, participants covered an impressive 1,334.91km – covering England's distance right up to the quarter-final stages – a sign, perhaps!

"LRS is so pleased to have been able to raise over £1,000 between the two charities. The World Cup theme fitted in well with this exercise-clocking fundraiser, an event Monica would have enjoyed immensely. Thank you to everyone who took part and donated".

"On behalf of the Trust, I'd like to thank everyone who took part in this fantastic effort – we're so grateful.

"We'll use these funds to continue our vital work to not only spread the word about sudden heart conditions, but to ensure that the right education and equipment is available to people so that they know what to do if someone collapses with sudden heart failure.

"In this way, we're confident we can save lives and reduce the shocking statistics around sudden, undiagnosed heart deaths."