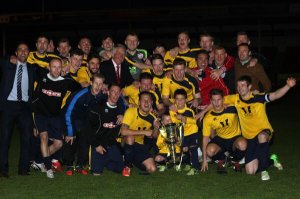 Congratulations to Quorn FC crowned league cup champions 2014 winning through a hard fought encounter v Tipton last night at Walsall FC. This first of a potential cup double is just reward for a memorable season narrowly missing out on promotion from the Midland Alliance Division.

Well done also Quorn FC - 'champions' in raising the awareness of JHMT's campaign to break the silence on SADS and reduce the incidence of sudden, unexpected death in young people,

Thank you for stepping up to promote the JHMT logo on the blue and yellow away strip which you've worn with much pride at the majority of away games during the Midland Alliance league campaign and in the cup final win last night.

Very best wishes from all your friends @ JHMT