Saints Legend Lawrie McMenemy – Save a Life in Schools Campaign

Saints Legend Lawrie McMenemy – Save a Life in Schools Campaign 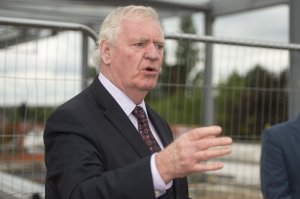 Saints legend Lawrie McMenemy has thrown his support behind the Daily Echo's campaign to get every school to install a lifesaving defibrillator.

The Save a Life in Schools campaign was launched after schoolboy, Sam Mangoro's life was saved by teachers with a defibrillator at Mountbatten School, Romsey, after the 16 year old collapsed in a PE lesson.

You only have to look at Fabrice Muamba, a Premiership Footballer. You could not get a better example of someone who was training every day and was fit as a fiddle, and it happened to him. That incident is the perfect example of how the right machinery can help, along with CPR.

I back the calls to get these schools and then carry the charge on to other parts of the community'.

Steve, who lives in Leicester, has set up the Joe Humphries Memorial Trust to promote the need for CPR and defibrillators in the community and has backed the Daily Echo's efforts down south, urging Hampshire schools to go further than simply buying defibrillators and training staff.

'We are launching a programme with all head teachers in Leicester to teach 12,000 Year 10 children CPR. What is good practice up here can be the same in Southampton. Every child can be a lifesaver'.