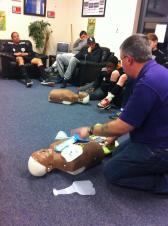 JUNIOR players from AFC Andrews Football Club are set to become the next young team to learn vital life-saving skills as part of a pioneering project being rolled out across Leicestershire.

AFC Andrews under-15s football squad, led by coach Darren Creed, will be taking part in Joe's Mini HeartStart, where they will learn cardio-pulmonary resuscitation (CPR) techniques and how to use a defibrillator.

Making this training available to local sports club is the brainchild of the Joe Humphries Memorial Trust, a local charity set up to raise awareness of sudden heart conditions such as SADS (Sudden Arrythmic Death Syndrome).

The training will be delivered by course instructor and former cardiac nurse Alan Harrison White from the trust, and follows the principles of the British Heart Foundation's HeartStart programme, which teaches people emergency life support skills.

"I'm really pleased that we've got the chance to teach club members and players some of these vital skills. We wanted to take the proactive step of signing up for this training because you never know when you might need to respond to an emergency. Every second counts when it comes to saving a life."

Alan Harrison White from the trust, who will deliver the training, added:

"The AFC Andrews young players and coaches will learn a variety of emergency life support skills. They will also learn about a defibrillator, a device that delivers an electric shock to the heart to try and restart it. The focus is on teaching people simple skills that could mean the vital difference between life and death."

"If CPR is started immediately and a defibrillator can be got to the victim within eight minutes, the majority of people can be saved."

SADS can sometimes – but not always – be triggered by the physical exertion of sport. It's a random condition that can affect anyone, at any time.

Joe Humphries died in October 2012, aged 14, whilst returning home from a training run near his home in Rothley. Since then, his family and friends have campaigned tirelessly to raise awareness of SADS and for more people to be trained in vital life-saving skills.

Any sports clubs wanting to register their interest in the training can email charles.poole@ntlworld.com

I am really pleased as a club we have been able to work with the JHMT. The skills that the under 15 players and coaches were taught last night are invaluable. Whilst listening to Alan, the trainer, it became apparent Joe was the same age as the lads which brought home how important the next two hours would be.

I have 1st hand experience of SADS, when my son was younger he was part of Birmingham city development squad, his coach was in his mid 20's and died on the pitch whilst playing and it was put down to SADS. I hope none of the lads ever have to use the techniques they learnt last night but if they do to its great knowing they will be able to act whilst waiting for paramedics.

Our chairman was attending last night and was so impressed by the professionalism of JHMT he wants to roll the programme out to our other youth teams.

The clubs aim is to buy an AED for the club house, the nearest one is over at the leisure centre but as we learnt last night 4 or 5 minutes spent running to get it really could be the difference between life and death.