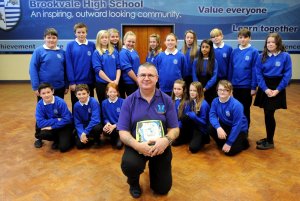 JHMT is on track to reach another key milestone in its campaign to raise awareness of sudden unexpected cardiac death in young people.

We have been raising awareness of Sudden Arrythmic Death Syndrome (SADS), which claims the lives of 12 young people age 12 to 35 years every week in the UK alone.

This Thursday (23rd January), our community liaison officer Alan Harrison White will talk to pupils and teachers at Groby's Brookvale High School about SADS, taking the total number of young people he's addressed to a staggering 5,000 in just five months.

Alan, who is a retired cardiac nurse, has been sharing information about the disease and its symptoms, and the importance of having CPR skills and knowing how to use a defibrillator in the case of a cardiac arrest.

Since Alan started his work on behalf of the trust in September 2013 he has shared the trust's messages with around 200 teachers. And along with his wife Jill he has also helped 91 people to take part in CPR training through the Joe's Mini Heart Start course.

Alan Harrison-White said: "SADS can strike fit and healthy young people at any time, and the trust is playing a vital role in making people aware of what has previously been a silent killer. I have been talking to students in the city and county and our message has been very well received. My target is to have shared this important information with 10,000 young people and 400 teachers by the end of the year. "