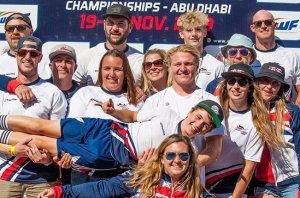 Last week, I represented Team GB at the IWWF World Wakeboard Championships in Abu Dhabi. This was an incredible experience, in terms of both competing on the world stage for the first time and getting to meet all of the professional wakeboarders from around the globe.

Unfortunately, in the team training sessions on the day before the competition out in Abu Dhabi, I took a very hard crash, resulting in a potential concussion and a trip to the hospital. This knocked my confidence in my ability going into the competition and brought about questions of whether or not I would be allowed to compete. However, luckily, the following evening (the night before my groups' qualification round) I was cleared by a doctor to compete.

At 8am on Wednesday morning, it was time for qualifications, I was the first rider of the day, meaning there was no pressure to match any previous runs by any of the other girls. Despite this, after taking two falls fairly early on, I was quite disappointed with my run and knew that it would not be enough to advance straight through to finals. However, two other girls from my heat who were not expected to make it through qualified after the top seeds in the heat also took early falls. This was going to make last chance qualification the next nearly impossible to qualify from, as these girls were the favourites to finish in the top 3.

The following afternoon, I rode in last chance qualifiers, where I was much happier with my run, taking only one fall, right at the end. Despite my best efforts, this was not enough to qualify for the finals. I am still happy with the way my run went, given the circumstances of the previous few days!

At the end of the week, we attended the closing ceremony, which gave all of the athletes a small taste of the Abu Dhabi desert. This was amazing, since normally when travelling to compete, you normally only seen the airport, hotel and competition venue. We had the opportunity to be driven off road through the desert in a 4X4, ride camels and sand board before enjoying the ceremony, followed by food, drinks and traditional entertainment.

Overall, Abu Dhabi was still a fantastic experience that I will remember forever, with both myself and the team coming away with 9th overall! I now look forward to next season, which will be my first season in pro women. I would just like to take this opportunity to thank the JHMT for the support they have given me this year, as without it, much of what I have achieved would not have been possible.