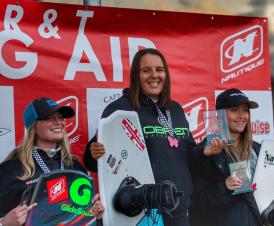 The Ryan & Tony Birch Memorial contest is an 11 year old event in remembrance of a young wakeboarder and his Dad from the West Midlands who died in a plane crash. Although it is less formal than the nationals and has no bearing on national rankings, it has a similar level of attendance and support. Personally, I think it also has a much more relaxed environment than normal contests.

When I arrived on Friday afternoon, the organisers asked me if I would move up into open ladies to even out the numbers between the junior and open categories. This meant that I would be riding against girls who ride professionally for a second weekend in a row.

On my practise set on Friday evening, I took a heavy fall, which made me feel more nervous heading into the competition the next day... However, I knew that if I could ride well, I had a chance of getting 2nd.

Saturday morning had much nicer water conditions for the contest itself. As I was riding in open, I wouldn't be riding until later in the day. I spent the morning catching up with friends and watching the other categories ride. There was lots going on, such as tombola's, clothing stalls and live music, which was helpful to distract me from my nerves.

Then, at about 4.30, it was my categories time to ride. I was last off the dock, so had to watch all the other girls. I am extremely happy with the way I rode, and managed to take the win for the second week in a row!