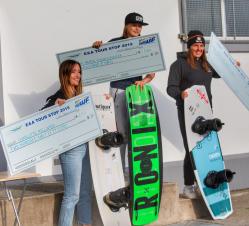 Last weekend I decided to attend the 1st stop of the Euro Tour in Northern Ireland, on the River Bann. As it was a pro event, I did not go with the intention to podium. My main goals were to land my competition run and concentrate on myself, rather than what the other girls could do. This second of these goals was made much easier because the start dock was located around the corner from the course, so you couldn't see what the other girls were doing.

In qualifications, I had one of the worst rides I have had since I started competing internationally. Due to stormy conditions and falling heavily on my first trick, I felt the need to play it safe and use the time to get used to the wake. I ended up qualifying in 5th place to the final, which was good, but I was still disappointed with the way I rode.

After qualifying 5th, I was second off of the dock in the finals. The weather had somewhat improved by this point in the day, which was promising. However, after falling first trick in qualifiers, I was extremely nervous and wasn't sure whether to throw down the same run. Despite my doubts, I knew I had to do the run I had planned to know I had done the best I possibly could. I managed to land my first pass and the majority of the second; the trick I fell on was a new one that isn't consistent yet, so I wasn't too disappointed.

To both my surprise and delight, I took 2nd place! This was the first pro contest I had entered abroad and my first pro podium, so all round a good experience.