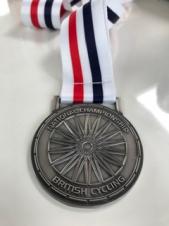 At the beginning of July I raced in the HSBC National Road Circuit Championships in Scarborough. The race was only my fourth road national this year and the course is renown for an epic 12% climb which you have to tackle six times in the hour race. I knew it would be tough but quickly the peloton reduced to just a few very strong girls which each lap became less. On the final climb my biggest opponent attacked and I tried to go with her but she just got away leaving me to sprint in out with 3 other girls. I won the sprint and claimed the silver medal which I am pretty pleased about considering this is not my chosen discipline and I was racing against strong girls who just race road. Not bad for a mountain biker!