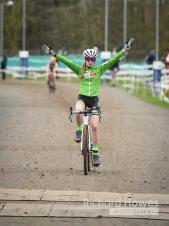 Round 6 came around two weeks later and I was comfortable with the course and my placing from round 5. There was a lot of slippery banks and cambers, a small wooded section which I quite enjoyed with a lot of fast flowing corners. I found it really fun and like this type of course, I've never really done that well at Shrewsbury due to the mud which can get quite frustrating and mentally tough. These past few months since last year's Mountain Bike season I have been working on mental strength and not giving up until I cross the finish line.

I had a really bad start and was probably about tenth on the first straight but quickly made my way through and was into second place going around the first banking straight off the tarmac, then quickly made my way into lead position. I managed to get a small gap of about 10 seconds, I knew I was the stronger rider in that situation and could make that gap even bigger. As the race progressed, I also progressed on gap building and eventually won. Winning the CX National Trophy Series felt pretty cool and was very proud of myself, onwards to CX National Championships in a week!