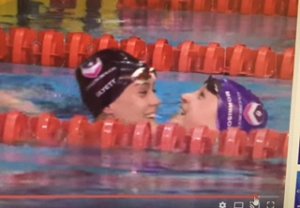 I travelled up to Ponds Forge Sheffield for the British Championships for the week as I had qualified for three events 50m, 100m and 200m Breastroke.

This was by far the best British Champs I had competed in since 2012 at the Olympic Trials in London at the age of 14.

My first event on Tuesday was the 50m Breastroke where I went in ranked 14th, I made the Tokyo Final going in second fastest.

My main event 200m Breaststroke. I had not had a PB in this event for nearly three years and was hoping all the hard work I had put in over the last 7 months would pay off.

I went in ranked 22nd so was hoping I would make the Tokyo Final, I swam a new PB 2.29.56 .This time put me in the Open Final ranked 8th swimming against four Olympians.

I came 8th in the Final and achieved another County Record,pushed on by Jocelyn Ulyett, my training partner who went on to break the British 200M Breaststroke Record.

Had three days off racing then on Sunday it was the 100m Breaststroke. I wasn't sure if I would make a final as I was ranked 26th for this event.

Another event I hadn't moved on for a couple of years, so I was very pleased when I swam a new PB 1.10.78 and went in 4th for the Tokyo Final.

I finished 4th in the final and set another PB 1.09.92 and another Ladies County Record.

Had a BRILLIANT week racing, now for a few days off then back to training ready for the British Summer Nationals.